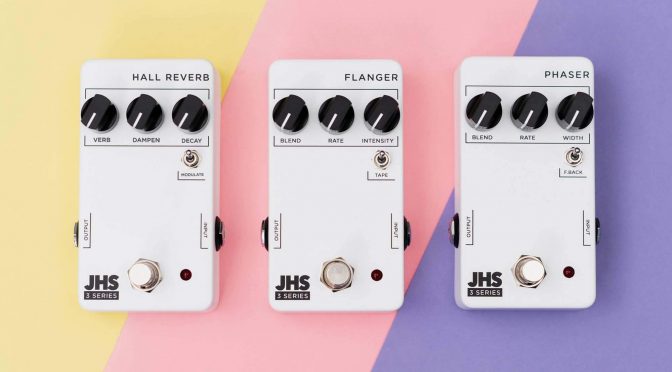 READ MORE: The best Christmas and Holiday Gifts for Guitarists in 2021

The 3 Series has now grown to a collection of ten pedals, each designed with simplicity and quality in mind. Previously introduced were the Reverb, Overdrive, Fuzz, Distortion, Delay, Compressor and Chorus pedals.

Hall Reverb is said to be ideal for players “searching for massive, infinite and even otherworldly reverb” and should offer much to those who wish to add ambient flair to their signals. It features verb, dampen and decay knobs, as well as a modulate switch for adding some movement to your sound.

Phaser is inspired by the classic circuits from the 1970s and offers four controls: blend, rate, width and a feedback switch. JHS says that the pedal is capable of delivering both standard and more “experimental” phase sounds, thanks to the blend and feedback controls.

Finally, Flanger grabs inspiration from classic pedals such as the Electro-Harmonix Electric Mistress, Tycobrahe Pedalflanger and MXR M117. On top of blend, rate and intensity controls, a tape switch lets you mimic tape-driven flanging as achieved in recording studios.

The JHS 3 Series Hall Reverb, Phaser and Flanger are available each for $99.

The post JHS Pedals adds the Hall Reverb, Flanger and Phaser to its affordable 3 Series stompboxes appeared first on Guitar.com | All Things Guitar.