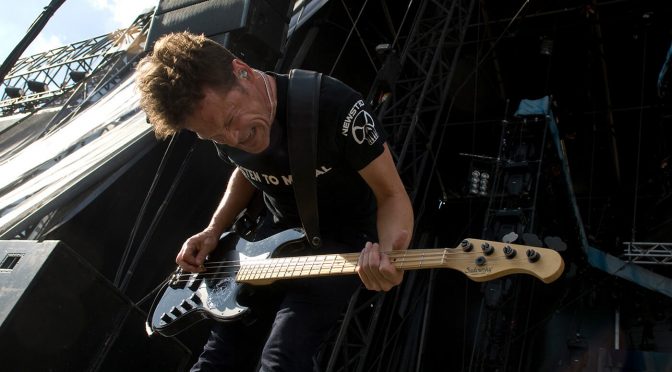 Former Metallica bassist Jason Newsted has spoken about his decision to leave the band, citing how he felt musically limited, and burnt out from doing long runs of similar shows.

READ MORE: Jason Newsted’s wife says he will not be joining Megadeth

Speaking on an episode of the Metal Hammer podcast, Newsted explained how he “went in a totally different direction” after the Black Album sessions.

“I liked playing the songs and I can raise myself up to perform the songs for the people and give it all I’ve got, but Enter Sandman for the three thousandth time in a certain amount of days – it fucking wears on you,” he explained.

Comparing the experience to that with his current project The Chophouse Band, Newsted said: “I’ve got dozens of new songs we’re working on all the time, all with different instrumentation and shit. And if I’ve gotta sit on one for too long now, I’d go fucking crazy.

He speculated that the more rigid nature of the Metallica gigs affected his performance: “I can’t just do that Broadway show where it’s the same, same, same, same, same. And that’s what I thought was my advantage and my being able to harness and manage the balance.

“I wanted to be that person that I knew myself to be on and off the stage with Metallica. When people saw me, they knew they were getting everything I had left – every fucking ounce of sweat on the stage every time.

“The way I was able to continue to do that was by playing wacky music with my friends. It kept me cleansed, it kept me strong, it kept me interested in music. If I only had that one-dimensional part of music, I would have called it a long, long time ago.

He concluded by saying: “I know I can play the metal. I climbed that mountain – the tallest one. I can do that shit. Tell me what time you want me to throw down. I can throw down that stuff anytime. But I’m not satisfied with just that, and I haven’t been for a long, long time.”

Newsted joined Metallica in 1986, replacing the late Cliff Burton. He played on The Black Album, Load and Reload, as well as …And Justice For All. He left in 2001, after his request for a break to focus on his side project Echobrain was rejected by the band. Bass parts on St Anger would be recorded by producer Bob Rock, before Newsted was permanently replaced by former Suicidal Tendencies bassist Robert Trujillo in 2003.

The post Jason Newsted on quitting Metallica: “Enter Sandman for the three-thousandth time in a certain amount of days – it fucking wears on you” appeared first on Guitar.com | All Things Guitar.