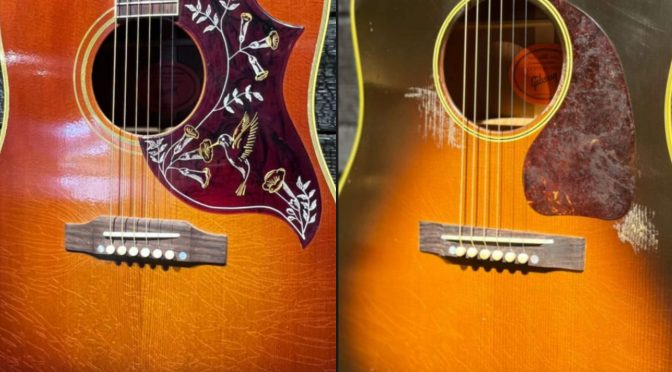 Gibson Brands Brand President Cesar Gueikian may have revealed a line of artificially-aged acoustic guitars – possibly by the Murphy Lab – in the works.

READ MORE: Gibson teases “experimental” Moderne prototype is in the works, after being spotted onstage with Metallica’s Kirk Hammett

Gibson Custom Shop labels can be roughly made out in the sound holes of both models, signalling that these relic’d acoustics might be made available as a premium offering sometime in the future.

Finish checking can be seen in the finish of both models, but other details cannot be confirmed.

This isn’t the first time Gueikian has given Gibson aficionados a peek at upcoming gear, having previously revealed the Adam Jones Silverburst Les Paul Custom in a video last year.

The guitar brand also recently launched its first-ever music scholarship programme, which is set to provide funding for 15+ students, as well as setting them up with gear and instruments. Gibson states that the scholarship is available to students with a guitar interest, who are planning to pursue music of some form in college and will be available to high school seniors who are about to embark on their post-graduate education and careers.

The post Is Gibson planning to release Murphy Lab-aged acoustic guitars next? appeared first on Guitar.com | All Things Guitar.