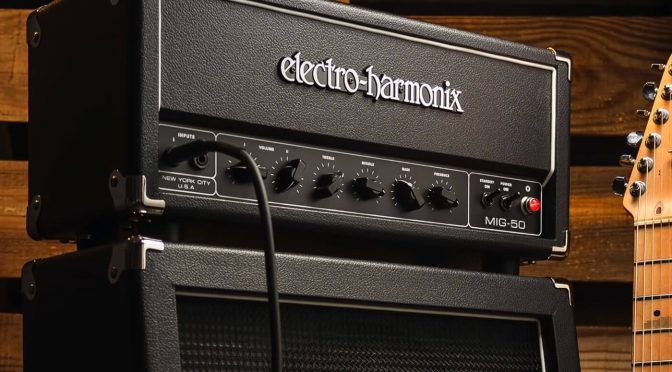 Out of the dozens of amplifiers I own, there’s one that stands out. It’s the definition of perfect, and in its own way, it might well be the most important amplifier ever made. I know what you’re thinking, “Whoa there, Josh – I thought you were the effects guy? And I thought this column was about guitar effects?! You need to stay in your lane there, buddy, get back on script!”

READ MORE: Space & Time: The birth of reverb, delay and other good vibrations

I hear ya, weirdly intense imaginary reader, but put away those pitchforks for a second and consider this: amps might not be effects, but they’re an absolutely pivotal part of the story of electric guitars. Arguably the most important part. Why? Because without an amp, you can’t hear the guitar, and because if the right amplifiers hadn’t been invented at just the right time, guitar would never have become popular music’s greatest weapon.

To appreciate how radically different things could have been, you have to understand the pre-1960s world of guitar, an era that had never seen a fuzz pedal, the Beatles or flower power. There was a blissful innocence to every guitar, amplifier and piece of gear made before the 60s. It was like watching a child grow with only the concerns of exploration and adventure in mind.

In the 50s, guitar was simply an instrument, a way to make chords and melody, but the 60s would soon make it a weapon of mass social deconstruction. The electric guitar was transitioning from an experiment to a successful and dominant force, and the evolving amplifier was its voice in the crowd. The evolution of the amplifier is essential to the evolution of guitar and today we need to dive deep into how it all started. We need time travel back to 1809, so I’m going to quote my good friend Samuel L. Jackson here: “Hold onto your butts.”

Charles Darwin was a naturally curious guy who first pursued a career as a doctor, though he ended up giving that line of work a hard pass, and I can’t say I blame him; opium cough syrups and cocaine toothache medication were considered cutting edge at the time. Instead, Chuck D ended up hitching a ride on a ten-gun Royal Navy ship for a five-year voyage to South America and back again – that’s how unpalatable a Victorian-era medical career was, folks.

Now, I don’t know if Darwin could read tabs, had a favourite Nirvana song, or cared for those new Fender Acoustasonic Jazzmasters that are all over the internet nowadays, but for his sake I hope so. Just imagine a five-year voyage without a guitar to play Stairway To Heaven and Free Bird on! In any case, Darwin’s revolutionary ideas about how the world became the way it is also gives us a way to understand music, and especially our guitars, as they exist today.

Darwin was of course one of the first scientists to suggest that there was a system present within nature that explained the way things evolve. It explained how the tiny, consistent biological changes that caused organisms to live longer, better, healthier lives. It’s a system you probably know better as natural selection.

I know most of you have visions of lizards and monkeys in your mind right now – or maybe even that intense scene with the dinosaurs from Fantasia – but this system doesn’t just exist as an explanation of the natural world, it can also help us see how small changes lead to big changes in industry, music, inventions, science, entertainment and pretty much any sphere of life. It gives us a framework today to understand that nothing appears from nothing, and everything comes from something.

Lee de Forest’s vacuum tube would change everything – thankfully for gigging guitar players everywhere, they weren’t all as big as that one. Image: O. L. Shider form Triangle / Getty Images

To help you see the bigger picture, let’s talk about transportation. The settlers of the Oregon Trail in the 1840s used covered wagons to cross the country in search of a new home, but just 70 years later, men like Henry Ford replaced the mules and oxen-driven wagons with a gasoline-powered engine.

The effects of this evolutionary movement forward are astounding. Now if you look almost one hundred years later to the day, Elon Musk released the Tesla Roadster, the first successful fully electric car. Yup. That’s what the natural selection of transportation looks like. At this rate, who knows, our children may finally see those flying cars we were promised in all those 80s and 90s movies.

But the important thing is how we got there. Henry Ford didn’t just wake up one day and invent the mass-produced automobile from the ground up – thousands of small, seemingly unimportant discoveries and inventions add up over years and decades until finally, we reach a technological tipping point, and these tipping points change history from the inside out. And that’s true of all massive inventions that change our world – they don’t just happen, they evolve.

Now, in my previous columns, we talked about how the electric guitar was invented and how the first effects ever were made. I promised we’d end up in the 1960s, the greatest decade of music ever, and we will. But we need to take a quick detour first.

Today I want to show you how the electric guitar amplifier actually came before the electric guitar and its effects. It’s a classic case of the chicken and the egg, and it’s essential to understanding the electric guitar’s evolution and origins. Remember earlier where you said, ‘Josh should only talk about effects”? Well, I am. I’m talking about the effects of technological evolution. See what I did there?

As early as 1876, inventors were developing a way to amplify phone calls across longer distances. After solving that problem, electrical engineers shifted their focus to radio waves, hoping to amplify the signal from a single radio station enough to be received on a radio located hundreds of miles away.

Just as turning up the volume on our guitar amplifier causes more power to our speakers, allowing more people to hear us, radio engineers were effectively doing the same thing. By turning up the power of a radio’s transmitter, more people could hear what was being broadcast. Telephone and radio are the origin of amplification, and guitarists owe everything we know to the engineers who laid the foundation of electrical design. Essentially, you don’t get Eddie Van Halen rocking out on his guitar unless you have a parade of pocket protector-wearing nerds beforehand creating the technology for him to do it.

One such nerd was a guy named Lee De Forest, a 33-year-old Iowan who invented the triode vacuum tube in 1907. This was the first invention that allowed us to amplify sound in a dependable way; it took off immediately and forever changed the boundaries of what we could do with audio. Engineers in every field imaginable saw immediate use for this technological advance. Radio, movies, live entertainment, and especially musicians had much to gain from Lee’s discovery. The triode vacuum tube finally let us be louder than real life.

Coincidentally, Lee is a perfect example of an unknown legend in guitar. Just imagine all the guitar forums without arguments over why tubes sound so much better than solid state. Thanks, Lee, for all the quality late-night reading.

The Vitaphone system changed the movie industry forever, but it was bad news for that nice lady playing piano down at
the front of the theatre. Image: Getty Images

Not so silent movies

In 1925, movie theatres had found their way into every major city in America, and these theatres had an accompanist on the payroll. In the era of silent movies, soundtracks were provided by live musicians, usually a guy or gal thumping away at the piano to a musical score provided by the filmmakers – or, in the really ritzy theatres, played by a full orchestra. The so-called silent movies weren’t actually silent at all. The sound was just produced live instead of being recorded beforehand and played back like we think of today.

The first ‘talkie’ (a movie with pre-recorded, synchronised dialogue) was released in 1927: The Jazz Singer. It only had three minutes of talking in the middle of the film, because the Vitaphone system of the day wasn’t able to synchronise the picture to voice for an entire movie. After a few minutes the audio and picture sync would drift apart – like a Bruce Lee movie, but 500 times worse – and things got messy.

Fortunately, filmmakers were able to improve the system fairly quickly, and soon they could synchronise sound for an entire movie. Now that pre-recorded audio and video could finally function side by side, the movie industry exploded. As movie theatres got bigger, sound needed to be amplified even more, which pushed the development of theatre sound systems.

Of course, not everyone was thrilled about this development in technology: namely, the hundreds of thousands of musicians who ended up out of work. These same musicians who had played in every theatre in America in 1925 found themselves in an entirely new musical and technological era by 1930: the era of electronic recording.

Understandably, the American Federation of Musicians was upset. Their members were out of work and weren’t paying dues. They launched an ultimately unsuccessful campaign to convince the general public that live music was better than this lifeless pre-recorded monstrosity. This campaign included an incredibly creepy page-sized advertisement in Liberty magazine which depicted America as an infant child, and the new synchronised music as a robotic nanny.

As unfortunate as it was to see musicians lose their gigs to electronic innovation, a few decades of gradual evolution as we moved into the electronic age would soon give live music the rebirth it desperately needed. The man responsible for birthing this evolutionary tipping point was a radio repairman by the name of Leo Fender, and the means of this great leap forward is my favourite guitar amp, the 1959 Fender Bassman. Now the Bassman wasn’t the first guitar amp, and the ’59 model wasn’t even the first Bassman, but it might be the most important in the history of popular music. Join me again next month, and we’ll start digging into just why.

The post Invention & Evolution: Charles Darwin, Henry Ford and how the death of silent movies birthed the guitar amplifier appeared first on Guitar.com | All Things Guitar.