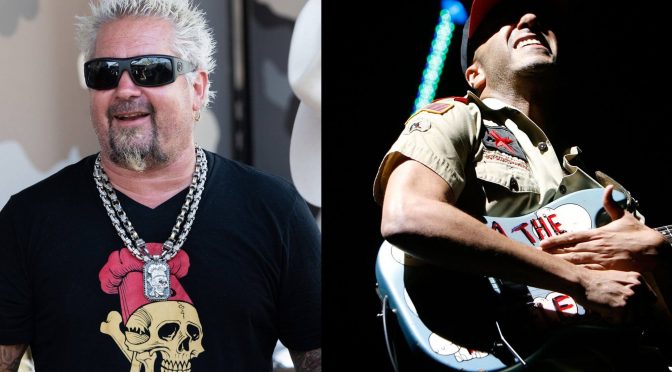 TV personality and celebrity restaurateur Guy Fieri is a certified Rage Against the Machine fan who can’t seem to get enough of the band’s live shows.

You read that right — the mayor of Flavortown himself is apparently following RATM on their latest reunion tour.

Fieri’s latest musical obsession was first revealed after a TikTok video of him rocking out at the band’s opening Cleveland concert (27 July) went viral on the platform. Prior to RATM’s Cleveland gig, Fieri shared on Twitter a video of him and his son Hunter at the concert venue, describing it as a “moment in history” and the culmination of a “lifelong journey” that they’ve been on.

The Diners, Drive-Ins and Dives host later on retweeted a video of himself at the show, with the following caption: “The best concert ever. Until tomorrow night in Raleigh….. RAGE RULES.”

The best concert ever
Until tomorrow night in Raleigh…..
RAGE RULES https://t.co/wpFi81sYwv

As expected, Fieri then made an appearance again at the 31 July show in Raleigh, where he can be seen singing along to Killing in the Name. Watch the fan-shot footage below.

Rage Against the Machine recently reunited for their first concert in 11 years on their pandemic-postponed Public Service Announcement tour. They are currently wrapping up the US leg of their 2022 tour and will head over to the UK and Europe to close out the year. Tickets are available via Ticketmaster.

The post Guy Fieri can’t get enough of Rage Against the Machine concerts appeared first on Guitar.com | All Things Guitar.