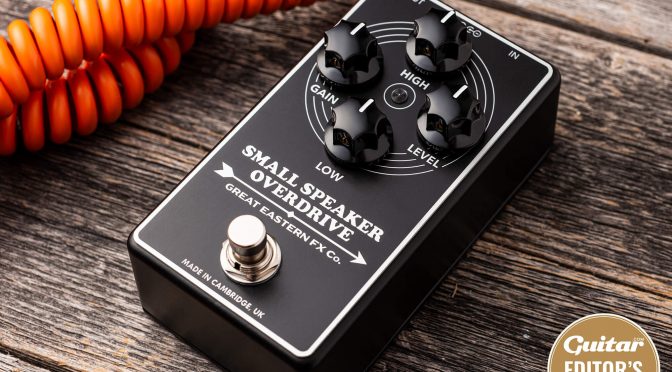 It’s been said more than once that tiny amplifiers are the great secret weapon of rock ’n’ roll. Well, it’s hardly a secret any more, and here’s the proof: a drive pedal that’s designed to make big amps sound little.

But the Small Speaker Overdrive is a smidge more sophisticated than that. This debut release from the Cambridge-based Great Eastern FX Co. is described as a “boost, preamp and tone-shaper”, promising a range of sounds beyond simply emulating the boxy blast of a cranked Fender Champ.

So what’s so special about diminutive amps? Aside from the obvious appeal of low-wattage combos that don’t need to be turned up horribly loud to start breaking up, a smaller speaker in a smaller cabinet means a tighter, more focused tone that can be easier to fit in a band mix. This is most famously apparent on the Layla And Other Assorted Love Songs album, where both Duane Allman and that other guy used Champs extensively.

To achieve the same effect with our pedal, we’re advised to start with the low control down at nine o’clock and dial in just as much bass as we need from there. The high knob is set up in a more traditional way, cutting or boosting the treble either side of noon.

The SSO’s monochrome look recalls the classy minimalism of the Rift Amplification EL34, and there’s certainly nothing in the build of this device that lets down its ‘British boutique’ price tag. It’s not a hand-wired showpiece like the Rift, but it is clean and tidy inside and out.

Our main testing station here will be a 20-watt combo with a neutral tone and a decent amount of clean headroom; but we will also experiment with a 12-watt Princeton, just to see what happens when we do half the pedal’s downsizing work for it.

We begin with the gain set even lower than the bass – and the early signs are very promising indeed. There’s a touch of grit involved but it’s really all about the slimmed-down low end and enhanced presence, making for a superb rhythmic riffing tone with optimum clarity and sizzle.

As we turn the gain up, the amp-like overdrive becomes more pronounced (though it never goes all the way into the fuzzy zone) and the sound does thicken a little – but in true Champ style, this is still a tone defined by its focus on the top half of the frequency spectrum… and, we ought to mention, by its superbly natural responsiveness to changes in pick attack and guitar volume.

So what happens when we turn up the lows? Well, there’s enough bass on tap to give chords a bit of thump, but it remains tight and chunky rather than open and bloomy – yes, just like a low-powered amp pushing at the limits of its headroom and physical dimensions.

If anything, running the SSO through a smaller combo just emphasises the good work it’s already doing. This is the tweed channel our brown Fender Princeton never knew it had, and single-note runs on a Les Paul are as sweet and stretchy as sonic bubblegum. Just don’t expect to feel the floorboards vibrate when you hit a big open chord, because the words ‘big’ and ‘open’ have no meaning here.

This seems to be something of a boom time for UK-based builders of high-quality stompboxes and, based on this subtly innovative twist on the ‘tweed in a box’ formula, there’s definitely room for one more.

DESCRIPTION Overdrive pedal, made in UK