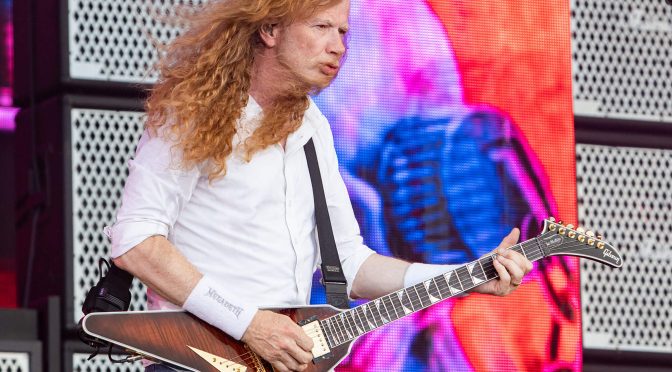 Gibson brand president Cesar Gueikian is back at his usual teasing antics with a look (and listen) at what appears to be an Epiphone version of the Dave Mustaine Flying V.

In a new post on his Instagram, Gueikian appeared to plug the new Badlander Amp from Mesa Boogie before calling attention to his “Epi-c guitar”. Not much can be seen of the guitar’s make and build in the video as it focuses on the instrument’s neck from behind, but a silhouette of Mustaine can be seen on the back of the guitar’s headstock.

Gibson previously revealed back in February that Mustaine would also be getting signature models from Kramer and Epiphone, though neither Gibson division has announced a launch as of the time of writing.

The partnership between Mustaine and Gibson has thus far produced his Gibson Flying V, a Gibson acoustic and an upcoming Gibson Explorer signature range, with Mustaine inadvertently displaying a USA-built Kramer in the background of a social media photo. The guitarist has previously referred to the Explorer range as “The third horseman” of his collaboration with Gibson, adding, “One more to go.”

Mustaine recently spoke to Guitar.com on 17 November in an interview where he revealed conversations with Metallica’s James Hetfield about working together on a project. The project was derailed when the topic of their publishing discrepancy from previous works came up, with Mustaine arguing that Lars Ulrich didn’t contribute to two of the tracks they’d previously made, and he would therefore not want to split earnings with him.

“James said, ‘Well, Lars has a different recollection of that,’ and I said that’s fine; there’s his side of the story, my side and the truth is somewhere. And that blew his mind, and we haven’t talked since,” he shared.

The post Gibson’s Cesar Gueikian is back with what could be a Epiphone version of the Mustaine V appeared first on Guitar.com | All Things Guitar.