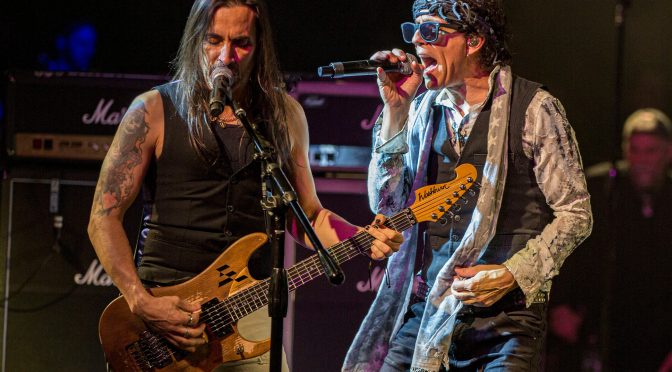 New music from Extreme is on the way, and lead vocalist Gary Cherone has recently spoken on the upcoming release – it sounds as though we’re in for an impressive record.

Extreme’s last recent full-length album dates back to 2008’s Saudades de Rock, so a new record has been a long time coming. The band has recently performed as a special guest for Cheap Trick at the Rolling Hills Casino earlier this month, with Cherone and bassist Pat Badger sitting down with the event’s host Eddie Trunk to talk all things new music and album release strategy.

On The Eddie Trunk Podcast, Cherone spoke of the potential sixth album stating, “It’s like the news cycle is so quick you [can’t] put out a whole record and not set it up, at least tease fans. I kinda lean towards trickling out a little bit.”

He continued, “I think this is some of the best stuff Nuno and I have written. I think he would say the same thing… There’s only one Nuno and he outdid himself on this record, his solos blow me away. I’m proud of a lot of the songs on the record.”

It looks like we’ll be waiting until next year for its release, but we should expect to see some single releases in 2022.

The band’s hit track Play With Me also featured on Netflix’s mega-hit series Stranger Things in the most recent instalment of the sci-fi drama – the same series which saw Kate Bush soar back into the UK top 40 chart with Running Up That Hill.

You can check out Extreme’s website to stay up to date with their latest releases and tour dates here.

The post Gary Cherone reveals new music from Extreme is on the way: “I think this is some of the best stuff Nuno and I have written” appeared first on Guitar.com | All Things Guitar.