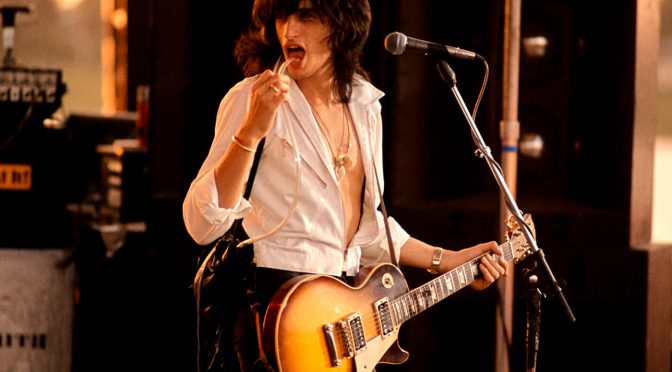 More guitars, more problems? Well, as any self-respecting guitar player knows, that’s simply not true, but there’s no doubt that the bigger your collection gets, the more chance that one way or another you’re going to end up losing track of one of your treasured possessions.

That’s what happened to these five famous guitarists, but thankfully things turned out alright in the end.

The loss of Zakk’s beloved original 1981 bullseye Les Paul Custom (better known as “The Grail”) occurred during a stint when Zakk’s regular tech, Fred Kowalo, took some time off after the birth of his daughter. The guitar was put into the band’s trailer after a gig, and someone forgot to lock it. During the drive from one to the next show, the door came open and several pieces of gear fell out of the trailer and were strewn across a highway in Texas. One of those pieces was The Grail.

Happily, the guitar was later recovered, thanks in no small part to some secret graffiti that Kowalo had done on the guitar to make it more easily identifiable.

“The Grail was Zakk’s most famous guitar and he used it on every album he recorded,” Fred told us. “It was Zakk’s iconic guitar. Now, it was sitting in a ditch somewhere in Texas. I was not there to lock the trailer and when I heard the news, I was heartbroken. I thought to myself if I had been there, this would never have happened. I remember seeing that guitar up close as a stagehand in Pittsburgh, long before I had become Zakk’s guitar tech. Finally setting The Grail up and changing its pickups was one of my first jobs after I got the gig with Zakk. I didn’t know how long I would have the gig, so I made my mark on history … I wrote in Sharpie inside the pickup cavity “ZW” and in the other “Thank You Zakk for the Gig. FK”.”

The guitar survived the fall out of the trailer (thanks to the Gibson Chainsaw Guitar Case it was in) and a guy in Texas picked it up off the road, assuming it was just a regular Zakk Wylde Signature Les Paul that bore some scars from years of abuse. It made the rounds until it wound up in a pawn shop and was purchased by a guy named Jerry Weisinger for $250, again assuming it was just a regular retail Zakk Wylde Les Paul. But when Jerry removed the pickups to give the guitar a clean, he saw the writing that Fred had scrawled in there years earlier. He did some googling and made arrangements to return the guitar.

“The Grail was returned home,” Fred recalls. “It actually flew in its own seat on the airplane. They bought it a ticket home and put it in the cabin so there was no chance it would be lost in the luggage. It made it home to Zakk and now resides in the studio safe and sound from the trials of the road. I bet that guitar has some good stories to tell.”

Back when Peter Frampton was in Humble Pie, the band was playing a series of shows at the Fillmore West in San Francisco. Frampton had recently swapped out his SG for an ES-335 and was experiencing some feedback, as was a typical issue with hollowbodies back then. A fellow musician and fan of Frampton’s named Mark Mariana suggested he try out his modified 1954 Les Paul Custom. Frampton used it for the entire set and was so impressed with the guitar that he offered to buy it on the spot. Mariana refused to accept any money for the guitar and gave it to Frampton as a gift. For the next decade, that guitar was featured on Humble Pie’s Rock On and Frampton’s iconic solo record, Frampton Comes Alive. It was unquestionably, Frampton’s favorite guitar.

Then in 1980, while on tour in South America disaster struck – a cargo plane carrying Frampton’s gear, including the Custom, crashed near Caracas, Venezuela, killing all personnel on board the plane. The guitar disappeared for years until it was brought into a local luthier named Donald Valentina for a setup. The details of how the guitar came to be rescued from the wreckage remains a mystery. Valentina tried to buy the guitar for years from the person who owned it. He eventually was able to purchase the guitar for around $5,000 in 2011.

Once he had the guitar, Valentina flew it to Nashville, Tennessee himself and returned it to Peter Frampton. The guitar was sent to the Gibson Custom Shop for repairs and remains with Frampton to this day. Frampton dubbed the guitar “Phenix” because it rose from the ashes.

A video of Frampton’s reunion with the guitar can be seen in the video below:

Although he played many different guitars over the years, Jimmy Page was famous for playing Les Pauls – his “Number One” and “Number Two” were both 1959 Bursts (although Number One might have been an early 1960), but his first Les Paul was actually a 1960 Black Beauty – a three-pickup Les Paul Custom. This was years before Led Zeppelin. Page bought the guitar when he was 18 from a shop in London for £185 via a layaway plan in 1962. He opted for the three-pickup combination to give him more sonic range as he was doing a lot of session work back then. He didn’t bring the Black Beauty on tour with Led Zeppelin until the band’s 1970 US Tour.

The guitar was used during the band’s performance at The Met in Minneapolis, Minnesota on April 12, 1970. When the band landed in Montreal, Canada for their next gig, the guitar was gone. Page was devastated. He took out ads in various music magazines offering a reward for the return of his guitar. The guitar stayed hidden for over 20 years until, in 1993, the guitar was purchased by a vintage guitar shop in Minneapolis, Willie’s American Guitars, for $5000. The woman selling the guitar told the story that her husband, who had worked as a baggage handler at the Minneapolis/St. Paul Airport, had stolen the guitar and that the guitar had belonged to Jimmy Page.

The owner of Willie’s American Guitars, Nate Westgor, sent photos of the guitar to Page’s people who stated that the guitar was not his as it didn’t have the two holes for the extra toggle switches and the Bigsby tailpiece that Page had added.

Nate sold the guitar to an employee for $5,500, who owned it, and gigged with the guitar for the next several years. However, when the employee brought the guitar into the shop for repairs, in 2014, Nate, put the guitar under a blacklight – the lacquer had settled over time, revealing the holes for Page’s two extra toggle switches that had been removed and covered up. In addition, the 12th fret block inlay was unique – it had, what is characterized as “lightning with three stars to the left” this detail, as seen in old photographs of the guitar, was used to confirm that this was, indeed Page’s long-lost guitar.

The employee who owned the guitar was in need of money to pay some medical bills. It would have been an easy option for him to have the guitar authenticated with the newly unearthed proof and sold for a massive sum. But he and Nate decided to do the right thing and return the guitar to Page. Page exchanged the guitar for a ’59 Les Paul Custom, which was valued at about $45,000 – a decent return for a $5,000 investment, although if the Black Beauty had hit the auction block, it would have fetched well over that sum.

Throughout Aerosmith’s heyday, Joe Perry’s instrument of choice was his 1959 Les Paul. However, wracked by addiction, Perry sold the guitar to fund his drug habit, and the guitar drifted around various music stores and pawn shops until it was purchased by Slash, for $8,000. The Cat in the Hat had regognised the guitar as the one Perry had owned, and used the iconic axe on many recordings and videos, including the video for November Rain. Then in 2002, Slash decided it was time to reunite Perry with his long lost guitar and gave it back to him as a gift. “His heart is so big, I don’t know how it fits in his chest,” Perry told Conan O’Brien of the kind gesture.

After Perry got the guitar back from Slash, he was clearly determined to never be parted from it again. The guitar was given its own security guard who would sit with the road case from the moment it left the truck until the moment Perry’s tech came to collect it for that night’s show or session. Unsurprisingly with such high security, the guitar remains with Perry to this day.

In December 1992 the Smashing Pumpkins played a show in Detroit, and sometime after that gig, Billy Corgan’s prized Stratocaster, which he’d used to record the band’s debut album Gish a year earlier was stolen. Rewards of up to $20,000 were offered for the return of the guitar with no questions asked but the guitar was never recovered, that was until until 27 years later when Corgan was contacted by a mother from Flushing, Michigan named Beth James who had purchased a guitar at a garage sale for $200 a decade earlier – she didn’t even play guitar, but had bought it to hang on the wall for decoration.

Years later, James was decluttering her house, and looked into the value of the guitar, in the process finding out the true history of her wall art. The guitar had plenty of unique identifying features, a cigarette burn on the neck, the initials KM engraved in the bridge, the flushed middle pickup, and of course, Billy’s own artwork adorning the body, featuring the word “fuck” scratched into the paint.

In 2019, Corgan was reunited with the guitar, and took it to a local Chicago luthier named Geoff Benge to be repaired. The guitar was from the CBS era, when they would often use necks and bodies from different years, but Benge estimated the Stratocaster to be a 1975, even though the neck indicates it’s a 1976, the pickups indicate 1975. After it had been restored to full working order, Billy put the guitar to use and it can be heard on the band’s latest album, Cyr. “I’m in the studio working on new songs, and I literally am going to go take it and have it strung up and checked and I’ll put it right to work, I mean, that’s what guitars are for,” said Corgan of his long lost instrument.

The post Five iconic guitars that were lost and returned to their owners appeared first on Guitar.com | All Things Guitar.