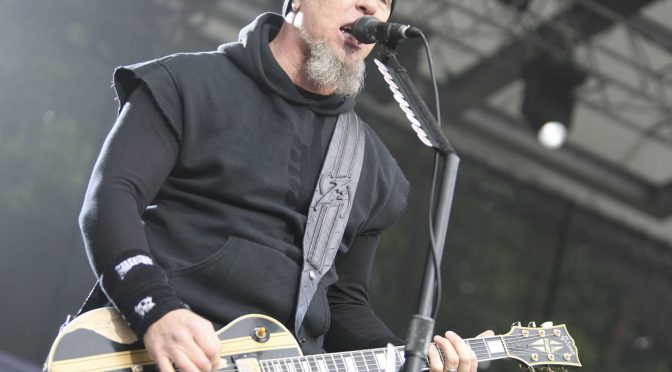 The Gibson Les Paul is one of the most iconic instruments of all time, and we have seen some stunning signature runs in the past. But before we get another Slash signature, here are a few other artists who we think deserve their own model.

The Metallica frontman has been using the single-cut ESP Iron Cross for years now, but did you know that guitar was very nearly a bona fide Gibson signature model? Gibson and the Metallica frontman worked on the Iron Cross Les Paul for two years, and a while back former Gibson A&R man Alex Becker posted some pictures of the prototype, which is based on a Les Paul Custom complete with the trademark Iron Cross behind the bridge.

Becker wrote in the image caption, ​​”When I was doing artist relations for Gibson, I was nearly able to get James Hetfield for a Gibson Custom signature guitar. But as our back then CEO was a crazy ass man, it unfortunately didn’t work out and the Iron Cross was then made by ESP.”

Papa Het himself seemingly also confirmed the guitar’s existence in a reply to a fan on his now-deleted Instagram account, in which he appears to explain why the signature model never came to be.

“Who wouldn’t want a Gib sig model? But an icon turned dinosaur. I tried working with Gibson on the Iron Cross for 2 years. Their artist relations suck. They are so bogged down in red tape nothing gets done. I sacked the relationship. Way out of touch. ESP listens to the artist. After Gibson’s Iron Cross fail they tried to sweet talk Kirk and he bit the hook.”
As Hetfield alluded, Kirk has found his way back to Gibson under the company’s new ownership, and announced a brand partnership with the brand last year which has seen myriad Hammett signature instruments from Gibson teased by both the artist himself and brand president Cesar Gueikian. Former Metallica bandmate Dave Mustaine is already back in the Gibson Brands fold after years with Jackson, could Hetfield be another Big Four man back in the fold?

One of the most iconic Gibson guitars owned by Keith Richards is the 1959 Les Paul Burst better known as the Keith-Burst. It was purchased at Selmer’s in London – the same place Peter Green and Jeff Beck obtained their own used ’59 Bursts. The guitar had a prominent role in early Rolling Stones recordings and live performances, and appeared during the band’s appearance on The Ed Sullivan Show in 1964.

Keef allegedly lent the Burst to Jimmy Page for some studio sessions, and later loaned it to Eric Clapton when he was playing in Cream at the ’66 Windsor Jazz & Blues Festival. Richards sold the guitar to Mick Taylor in 1967, however, when he was in John Mayall & The Blues Breakers. Of course, Taylor would later end up joining the Rolling Stones in 1969, bringing the Keith-Burst back with him. In 1971, the guitar mysteriously disappeared. It later resurfaced in the hands of Bernie Mardsen, who sold it to a private collector, where it remained until 2003, when it sold at auction to another private collector, who still has it today.

Neil Young’s career-long companion, Old Black began its life as a Goldtop but was somewhat crudely painted over with black paint. The guitar found its way into Young’s possession in 1969. Three years later, Young fitted a mini-humbucker from a Gibson Firebird into the bridge position, which remains, while the neck pickup is a P-90 with a different pickup cover. The guitar features a Tune-O-Matic bridge, which is not stock. It once wore a Bigsby tremolo added in 1969 too. Additional modifications include a switch that bypasses the pots.

Some say Gibson tried to make replicas of Old Black in 2005 and release them secretly in Japan. Most accounts say there were six VOS (vintage original spec) and six Tom Murphy-aged models, but that Young caught wind of the project and had his lawyers issue Gibson a cease-and-desist. Production was halted. It’s clear there would be no signature Old Black Les Paul without Young’s blessing, back in 2017 Guitar.com reviewed a Gibson Custom Shop one-off that was clearly inspired by Young, but that’s likely about as close as we’re gonna get.

Genesis axeman Steve Hackett has owned several notable Les Pauls over his career. His late 1957 Les Paul Goldtop is believed to have been purchased in 1973, when his LP Standard was stolen and held for ransom during the North American leg of the Selling England By The Pound tour. The guitar features the iconic PAF pickups and a Tune-O-Matic bridge. It’s still in Hackett’s possession, too, but has been retired to studio duties only.

A signature recreation of Hackett’s ’57 Goldtop would be incredible, especially if Gibson could get some solid PAF recreations, perhaps using old-stock magnets and wire.

Like Hackett, King Crimson guitar guru Robert Fripp currently plays Fernandes Les Paul copies live. Perhaps, then, it’s time for Gibson to reclaim their design – and some of the Fernandes innovations that followed it. It wouldn’t be the first time. Remember, Slash’s Appetite Les Paul was not a Gibson product but rather a replica made by Kris Derrig.

Fripp’s Fernandes guitars are loaded with fabulous features that allow them to interact with various effects systems. In addition to a sustainer, Fripp’s guitars also incorporate piezo pickups that can be outputted into various MIDI systems to allow for engagement with outboard effects. They also feature a killswitch, Seymour Duncan pickups in the bridge position, and several mini switches that control the various output signals.

As for the Fernandes sustainer, that would have to be swapped out for that of another brand, such as Sustainiac, if Gibson were to take the guitar on. Sustainiac has been contracted by companies such as Schecter, for use in its Synyster Gates’ signature model, so it can theoretically be done.

In the early days of King Crimson, Fripp played a three-pickup 1959 Les Paul Custom, with its pickup covers removed and one white bobbin. That guitar served as his workhorse from 1969 until about 1974. This is the guitar with which he recorded all the classic King Crimson albums of that era, and is probably worthy of a signature run of its own. It’s still in Fripp’s possession, and even made a recent appearance on Toyah & Robert’s Sunday Lunch cover of Heroes.