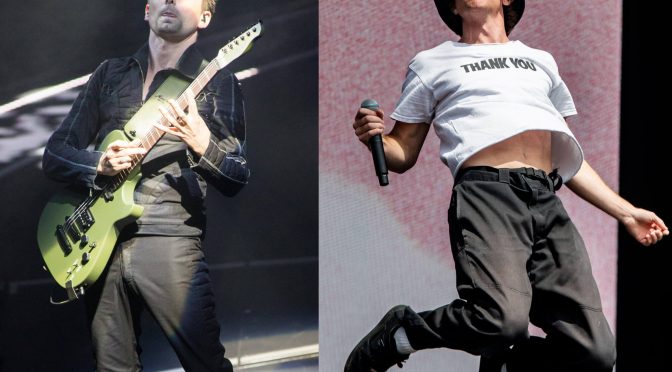 Muse and Turnstile’s recent nominations for Best Metal Performance at the 2023 Grammys has apparently left some fans scratching their heads and tearing their hair out.

READ MORE: Glenn Danzig voices frustration at lack of metal at “that shit they call the Grammys”

Earlier this week, the Grammys revealed their nominations for 2023’s awards, causing — to absolutely no surprise — a stir across the internet for their decisions in the metal and rock categories.

According to the 2023 Grammy Nominees, English rockers Muse are now considered ‘metal’ given that they’re in the running for Best Metal Performance alongside Ozzy Osbourne, Megadeth, Ghost, Muse and Turnstile.

While a number of Muse fans were found celebrating the band’s unexpected nomination, the decision has once again set aflame the discussion about what is (or isn’t) metal.

“Muse is Metal? Get a fucking clue!” one Twitter user raged. “What an embarrassment this organization is and always has been!” “Congrats to Muse for becoming a metal band,” joked a fan, while another straight up asked: “How the hell were Muse nominated?”

The Supermassive Black Hole hitmakers are not the only ones receiving flak for their Grammy nomination. Turnstile’s inclusion in the Best Metal Performance category has also sent metal fans reeling, with a Reddit user commenting, “I love that Turnstile album but METAL? EXCUSE ME???”

“No hate to Turnstile, I wish them all the best but them being nominated for best metal performance says a hell of a lot about the voting body at the recording academy,” blasted one Twitter user. “I LOVE that Turnstile have been nominate for three Grammys, but Best Metal Performance?” questioned another.

Ok I love Turnstile as much as the next indie diy kid but Best METAL??????? Performance ?? bruh the recording academy truly is a buncha geezers https://t.co/TytLoF144M

The fact that Blackout — the song which earned Turnstile their Best Metal Performance nomination — was also nominated for Best Rock Song certainly didn’t help make things less confusing for everyone.

Fans were also not shy to offer their personal opinions on who they think should have been nominated in this year’s metal category, with many naming deathcore favourites Lorna Shore as their choice.

Check out some of these reactions below.

since when is Muse being considered “metal” https://t.co/G4awcYIaN7

Ghost is not metal. Muse is absolutely not metal.

mainstream world/normies are only interested in controversial symbols. NO accolades are rewarded to reasonable talent.

Seriously… How ignorant are you, @RecordingAcad ?!

Lorna Shore should be nominated and fucking sweep the floor with the rest of the nominees, regardless of who they fucking are.#FuckTheGrammys pic.twitter.com/tWwSiGUhwQ

I’m disheartened that @LornaShore has NOT been nominated in the Best Metal Performance category at the #GRAMMYs this year. Instead of promoting younger talents, this category of @RecordingAcad is running on nostalgia mode with the same old @OzzyOsbourne, @Megadeth & the lot.

The post Fans mad over Muse and Turnstile being nominated for Best Metal Performance at the Grammys appeared first on Guitar.com | All Things Guitar.