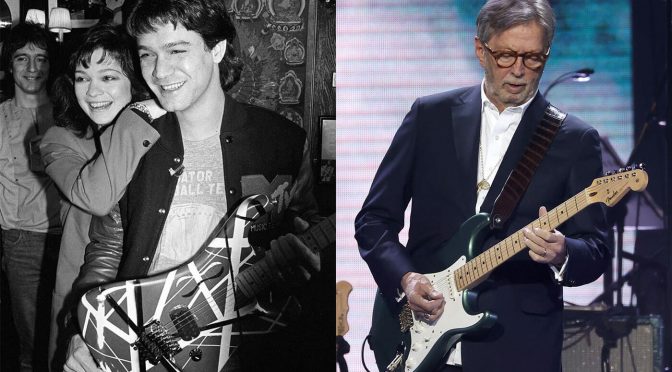 Actress Valerie Bertinelli, Eddie Van Halen’s first wife and mother of Wolfgang Van Halen, has weighed in on controversial blues rocker Eric Clapton, who recently announced he will not play gigs where proof of vaccination is required.

READ MORE: Eric Clapton shuns vaccine requirements at concerts: “I will not perform where there is a discriminated audience present”

In response to a news piece about Clapton’s decision, Bertinelli shared a photo of her, Van Halen and Clapton, captioned simply with “Once a dick, always a dick.” It’s not clear what pre-vaccine-hesitancy-Clapton behaviours she is referring to.

Some Twitter users responding to Bertinelli’s post, however, took the statement as a cue to share Clapton’s infamous 1976 stage rant when he endorsed far-right anti-immigration politician Enoch Powell, used copious racial slurs and demanded that foreigners leave the country to “Keep Britain White.” He has since expressed regret about these comments, calling the rant “an awful thing to do.”

His recent public statements have courted more controversy. Clapton wrote in a statement yesterday: “Following the PM’s announcement on Monday the 19th of July 2021 I feel honour-bound to make an announcement of my own: I wish to say that I will not perform on any stage where there is a discriminated audience present. Unless there is provision made for all people to attend, I reserve the right to cancel the show.”

While some vaccine sceptics have praised Clapton for being “brave”, many others have noted that vaccination will help prevent more COVID-19 outbreaks, as well as the difference in risk between receiving the vaccine and in catching COVID-19. Others still have found irony in Clapton’s use of the word “discriminated,” given his 1976 comments.

The statement regarding proof of vaccination followed Clapton’s appearance in a video interview where he described his own temporary reaction to the vaccine, and repeated misinformation about its effects on fertility.

The post EVH’s ex-wife Valerie Bertinelli on Clapton’s vaccine comments: “Once a dick, always a dick.” appeared first on Guitar.com | All Things Guitar.