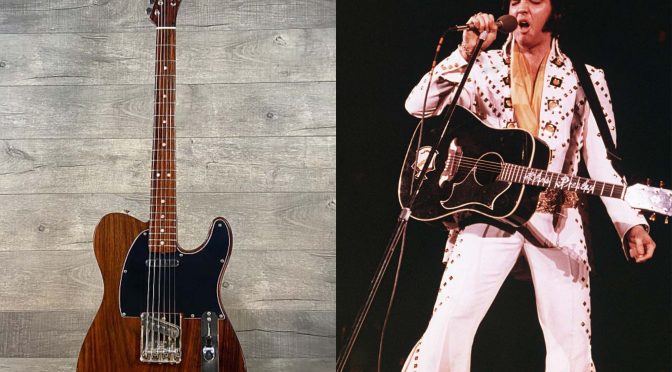 Elvis Presley’s ’68 Fender Rosewood Telecaster has been listed for sale on Reverb, for the modest price of $295,000.

According to the listing, Elvis used one of six Rosewood Telecaster prototypes over a six-month period, before finally deciding that the famously lightweight Fender was too heavy for him. After this decision, it was shipped to Nashville and landed in the hands of producer Scotty Turner.

The specs on the guitar are identical to Harrison’s Rosewood tele, with a chambered rosewood body and maple veneer center with a poly finish, rosewood neck and fretboard. The guitar also dons two single coil pickups on the bridge and neck. The listing also includes official documentation with a letter written by Eddie Miller and photos, along with the original hard-shell case.

Despite only being put on the website four days ago (19 November), the listing has already been suspended as two offers have been made. It is unknown if the listing will be back up and running soon.

In more Elvis news, the King of Rock’n’Roll has been honoured by two Gibson acoustic signature models. They are named the Gibson Elvis Dove and Gibson Elvis SJ-200 and are based on models played by the rock icon during his golden years.

You can check out the telecaster listing for yourself on Reverb.com.

The post Elvis Presley’s ’68 Rosewood Telecaster prototype is up for sale appeared first on Guitar.com | All Things Guitar.