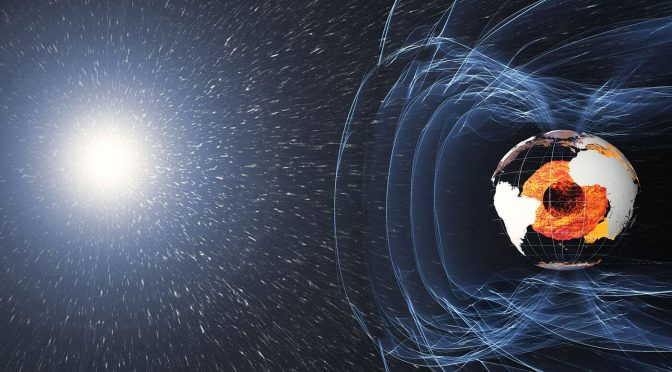 Fans of the effects pedal and amplifier manufacturer Electro-Harmonix have been left scratching their heads, after an email was sent out to mailing-list subscribers describing plans to harness energy from the Earth’s magnetosphere. Some have speculated that it’s an out-there marketing strategy for a new pedal. It isn’t.

Earlier today (23 July), those subscribed to the EHX mailing list received an email with the subject line “It Possesses 690,000,000,000,000 Joules of Untapped, Continuous Energy.” The same email also went up as a page on EHX’s website.

In the email, which is written in the first person apparently from the perspective of EHX founder Mike Matthews, the source of energy is described further: the sun compresses the Earth’s magnetic field by bombarding it with ions. This compression means that the magnetosphere is asymmetrical: stretching around 40,000-50,000 miles on the side of the Earth facing the sun and well over 2,000,000 miles on the side facing away from the sun. Matthews and his colleague Robert Myer are working together on a method of converting the potential energy of the compressed side of the magnetic field into usable energy here on Earth.

He writes: “I am currently assisting Bob with building a system on Earth to stimulate and retrieve energy to Earth by means of an oscillation that would begin in the magnetosphere, build, narrow down, then penetrate the ionosphere to be retrieved from almost a point source on Earth.”

A post on the subreddit dedicated to guitar effects, r/guitarpedals, links to the magnetosphere page on EHX’s website. It’s titled “Something new from EHX incoming?”, and the original poster writes in the comments: “I received this cryptic email today. Anyone have any info/guesses?”

Further discussion in the comments attempts to relate the discussion of a new energy source from space to guitar pedals.

“A power supply?” one user posits, before another notes that the brand has just launched two new power supplies. “Neither are space or physics themed, so I don’t think they’d make a big spectacle over a third one,” they wrote.

Notably, a user with the handle u/EHX_Engineering chimes in. They do indeed seem to work at EHX, as their posting history includes a job listing at the company and other details about EHX products. “I can assure you,” they write, “this has nothing to do with music.”

So, those who received the email or stumbled across this page on the EHX website can stop speculating about a new space-themed reverb pedal. Case closed. Sort of.

The small question of “what have Electro-Harmonix got planned for their new pedal?” has been eclipsing the much larger question of, well, everything else. Will an effects pedal company be the one to end Earth’s energy woes? What have guitar effects and space energy got to do with each other? Will EHX stop making pedals to focus on harnessing magnetosphere energy?

In case it’s not clear, the science of harnessing energy from space is slightly outside of Guitar.com’s journalistic wheelhouse. However, Mike Matthews’ description of the energy-focusing process does note Robert Myer’s experience in (and patents of) amplification circuits as a key aspect. This is the same Robert Myer that designed the original Big Muff. Amplification technology does, of course, have a large place in scientific signal processing as much as musical signal processing.

Has this come out of the blue? No. Mike Matthews has been interested in this for a long time. The figure in the email’s subject line – 690,000,000,000,000 joules, or 6.9 × 1014 – is taken from a letter Matthews wrote to a NASA scientist, David Stern, in 1999. Matthews asked Stern how much energy would be found in the compressed side of the magnetosphere.

“I won’t calculate it here – it’s long and hard,” Stern wrote back, “but [I’ll] just give you an order of magnitude estimate based on a formula which is really appropriate to a different case, and isn’t even exact there.” The resulting calculation gives the 6.9 × 1014 figure.

Guitar.com contacted Matthews to ask for some more details about the email. He was not forthcoming with further information on EHX’s energy research – “I cannot go into details,” he told us. It’s still not clear whether the energy-focusing technique has been proven to work, nor what has prompted the email to be sent out now.

However, Matthews did describe for us in slightly simpler terms the nature of the energy the technology will harness. “When you have a ‘compressed magnetic field’ (caused by constant bombardment of the magnetosphere from the ions shooting out from the sun (solar wind), it is a constant pool of energy.

“Think of a spring. You stretch it… and if you let it go, it would pop back.”

Matthews also revealed that fans of the brand’s effects need not worry, as “Our main focus is still Electro-Harmonix pedals. We have a deep design team and are working on a host of new pedals from simple analogue to complex, novel digital.”

But, the project is still an aspect of what Matthews is up to. “Bringing down the energy stored in the compressed magnetosphere is also of special interest to us,” he told us. “As a challenge.”

So what has caused the brand to contact its fans now about its energy research? Is a prototype or a launch imminent? Or is the email just a result of EHX migrating to a new website recently? We’ll have to wait and see. All we know is that alongside the Big Muff, the Memory Man and the POG, EHX has its sights set a little higher…

Read the full post about the magnetosphere at ehx.com.