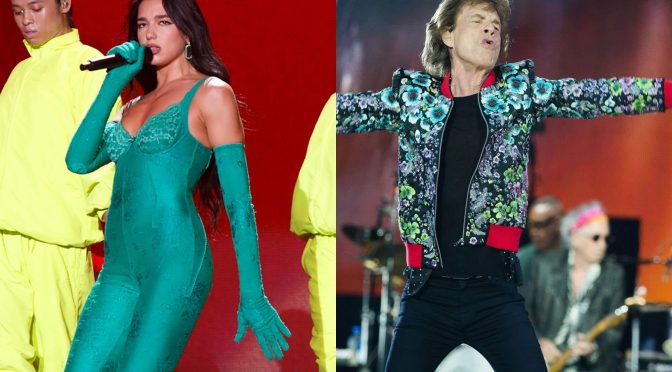 The singer, who is currently in the studio working on the follow-up to her 2020 hit record Future Nostalgia, posted a picture of herself and Jagger relaxing in the studio with the caption “sweeeet weeeek”. While the two appear to have been working together in the studio for a while, no further details about the track have been released at this time.

Check out the picture below.

Jagger made headlines earlier this year when he flashed a topless woman in the crowd during their European tour date in Spain on 2 August. Jagger cheekily responded to the woman by lifting his top up, quite suitably, while performing (I Can’t Get No) Satisfaction in another noteworthy moment on The Rolling Stones’ 60th anniversary tour.

The tour is also the first time the band have been back on the road following the passing of drummer Charlie Watts.

Previously, Jagger disputed the comparisons between him and former One Direction singer Harry Styles, who has previously named Jagger and his contemporaries as an inspiration. Jagger explained, “Come on, I was much more androgynous. And he doesn’t have a voice like mine or move on stage like me; he just has a superficial resemblance to my younger self, which is fine — he can’t help that.”

The comments followed his observations on the future of rock ‘n’ roll, in which Jagger named Yungblud and Machine Gun Kelly as artists that give him hope that “there is still a bit of life in rock and roll”. “In rock music you need energy, and there have not been a lot of new rock singers around. Now there are a few,” he stated.