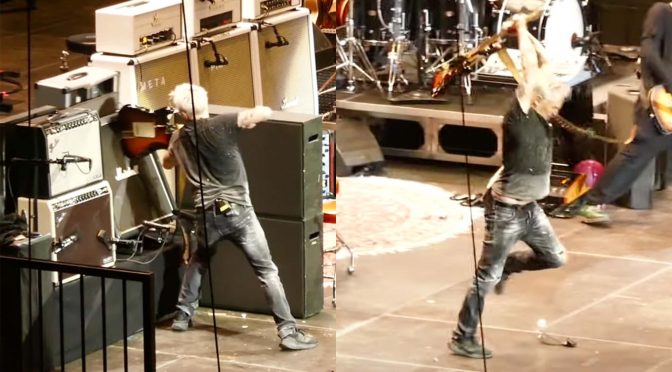 Pearl Jam’s Mike McCready has paid tribute to a long-standing rock tradition, destroying his guitar, amp and pedal board while onstage at the final stop of the band’s European tour. While the make of the guitar was unconfirmed, suspicions have led fans to believe it was his $15,000 2021 Fender Custom Shop vintage Stratocaster.

Performing at the Ziggo Dome in Amsterdam on July 25, after a few gig cancellations due to singer Eddie Vedder’s vocal issues, the guitarist appeared to be blowing off some steam by attacking not only his guitar but his guitar amp and pedal board too.

Just as the crowd were dancing away to a cover of Rockin’ in the Free World, the guitarist took the axe off of his shoulders and threw it at the amp before picking it up and hitting the backline of amplifiers that were positioned at the back of the stage.

It has not been reported what damage has been done, but from the looks of things, it will need a lot more TLC than some glue and sticky tape.

Even after the sunset Strat was hanging on just by its strings, the guitarist continues to throw the guitar to the ground, hitting a Line 6 DL4, before walking around the stage to say goodbye to the lively crowd.

You can watch the full chaos below at the 5:26 mark:

The post Did Mike McCready just smash a $15,000 Custom Shop Strat on stage? appeared first on Guitar.com | All Things Guitar.