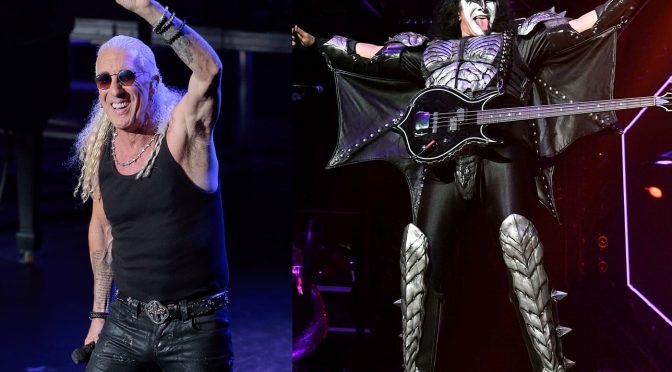 Since 2014, KISS frontman Gene Simmons has often repeated his view that rock is dead. Not only is it no longer financially viable, as he initially stated, he has recently also claimed that there’s no glamour or excitement from new rock bands. Twisted Sister frontman Dee Snider, however, has hit back at these claims, telling Simmons: “open your fucking ears and eyes!”

Speaking to the podcast Appetite For Distortion, Snider said: “Nothing makes me crazier than the words ‘rock ‘n’ roll is dead. It is so selfish, it is so self-serving, it is so self-absorbed. Self-this, self-that. It’s just wrong. Get out of your fucking house, open your fucking ears and eyes, and just look around! Stop hiding.”

“When Gene Simmons says [impersonating Simmons], ‘Let me tell you something, there’s no Bob Dylans or Jimi Hendrixes…’ No, you’re just not looking.”

Snider also went on to praise his children for keeping him up to date with new records: “They have kept me aware of not only that there’s new music but there’s great music… The talent and passion [is out there]… because it’s pure passion now.”

He added that: “These young kids don’t have a hope of getting rich doing it. Their best hope is that maybe we make enough money selling CDs and t-shirts after the show to get to the next fucking gig. It’s so real, it’s so heartfelt, it’s so for the love of rock ‘n’ roll. It makes me crazy when people say ‘rock is dead.’”

Earlier this year Simmons criticised young rock fans, saying that they “killed the thing [they] love.”

“As soon as streaming came in, you took away a chance for the new great bands who are there in the shadows, who can’t quit their day job ’cause you can’t make a dime putting your music out there,” he said.

“Because when you download stuff, it’s one-hundredth or one-thousandth of one penny.” Simmons seems to be conflating downloading and streaming, as the numbers he states are much closer to streaming revenue per song. Download revenue, depending on the platform and label agreements, can be a significant portion of the price paid for the digital album.