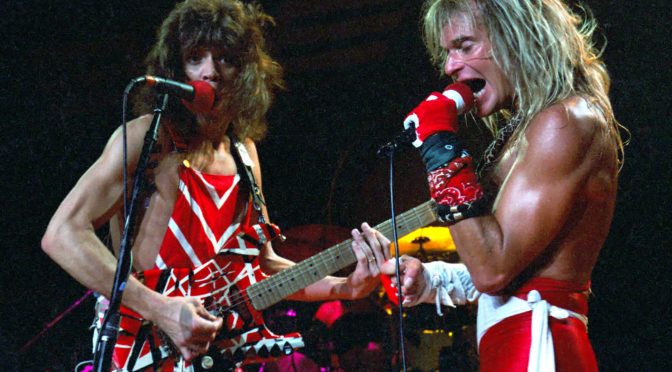 David Lee Roth has set the record straight as to the origins of the iconic striped design seen on Eddie Van Halen’s guitars: it was his idea, he claimed, in order to differentiate Eddie’s white Strat from Jimi Hendrix’s.

In a recent YouTube video, Roth explained that he had received comments about his new artwork entitled Big Wave, comparing its look to that of Van Halen’s guitars. “That’s because it’s my work,” he said in response.

He then spoke of how he and Alex Van Halen were recently reminiscing about the origins of the striped designs, saying: “We were laughing … [about] when I walked in with three rolls of tape – one roll of grey duct tape, one roll of black (not very sticky, the fucking thing kept coming off) electrician’s tape, and one roll of blue art tape like we use for pinstriping. I still use that today, whenever you put something on the painting or whatever.”

Once he’d walked in with these rolls of tape, he said to Eddie Van Halen to try “an expanding linear pattern, because the white plain guitar is eerily reminiscent of [Jimi Hendrix’s].”

“At that time, Hendrix was still very nearby, having very recently departed. The plain white Strat, it was, umm, a little bit reminiscentamundo. Sorry. I slipped into Español but I think you got it.

“At that point I said ‘an expanding. Linear. Pattern.’ What is that? Well, we laid it down and kaboom, within like four minutes I laid it out, including the little squiggle. What that’s from is from the non-sticky, shiny electrician’s tape that’s designed to be put on and taken off very quickly. It would pull, because we were playing five sets a night and it would get all sweaty and not ready, and it would contract.”

“The tape instantly pulled and it made the squiggle. Later on, we [would] spray paint it and pull the tape, like pinstriping a lowrider. You get what you call a half-tone version of it, that’s what I call it. It’s what a negative is to a regular photograph. So essentially – I say with a great big sense of humour – I invented coffee, they invented a cup,” Roth stated.

Check out Roth’s video and the painting in question above.

The post David Lee Roth says he came up with the stripes on EVH’s guitars to distance them from Hendrix’s Strat appeared first on Guitar.com | All Things Guitar.