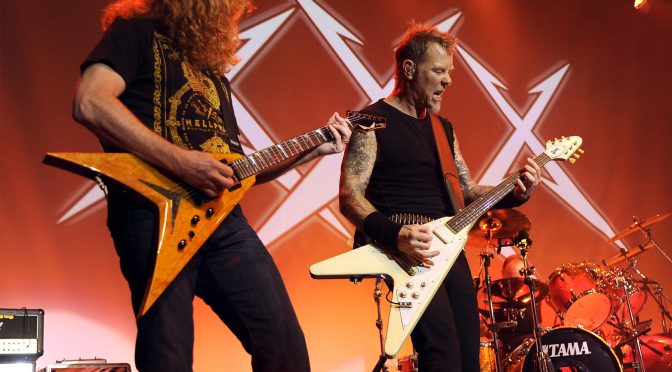 Megadeth’s Dave Mustaine has discussed his recent conversations with Metallica frontman James Hetfield following speculations that the two could be collaborating together again.

Rumours around the two metal giants working together on a future project are a fair bit complicated – according to Mustaine, a rift over earnings from old material has put a halt on their future collaborations.

When Mustaine spoke to us at Guitar.com last week (17 November), he explained that he and Hetfield were talking about working together on a project when the topic of their publishing discrepancy came up. Mustaine argued that Lars Ulrich didn’t contribute to two of the tracks they’d previously made, and he would therefore not want to split earnings with him.

He recalled, “James said, ‘Well, Lars has a different recollection of that,’ and I said that’s fine; there’s his side of the story, my side and the truth is somewhere. And that blew his mind, and we haven’t talked since.”

Now, in an interview with Songfacts, Mustaine has discussed further why the two won’t be working together. He told the site, “Part of the reason why we haven’t been able to really reconcile is because I had songs that when I left I didn’t want them to record, and they went ahead and recorded them but they didn’t pay me what my share of the songs were.

“James and I wrote Metal Militia and Phantom Lord – every note. And somehow, on the record [Kill ‘Em All] it says Lars gets 10 per cent. And on Metal Militia that Kirk gets some of it, and he wasn’t even in the band!” He went on to add, “I thought to myself, you know what? When you guys did that to me before, it was not cool. I said, ‘Don’t use my stuff,’ and you did it, and then didn’t give me my fair share. So why would I want to willingly enter into something like that? I wouldn’t. So that’s where we stand right now.”

Mustaine did admit he would love to work with both Hetfield and Ulrich again, so hopes of a future project aren’t totally off the cards, although he did conclude, “I think the real talent in Metallica has always been around the guitar – everybody makes fun of the drums.”

The post Dave Mustaine discusses ongoing rift with Metallica: “I think the real talent in Metallica has always been around the guitar – everybody makes fun of the drums” appeared first on Guitar.com | All Things Guitar.