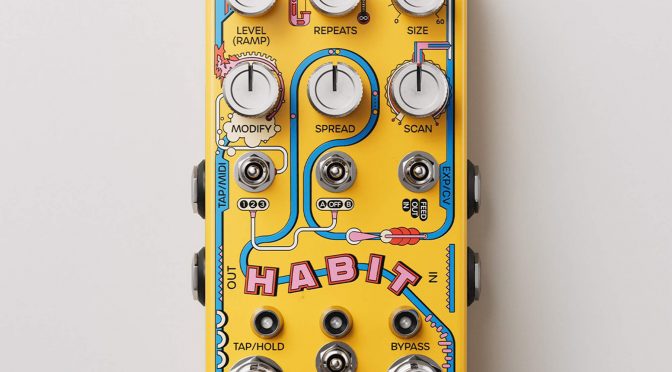 Chase Bliss Audio has announced its next pedal, Habit, a delay pedal that remembers everything you played in the last two minutes, and uses it to create interesting sounds and textures.

This always-on memory bank is referred to as a “digital tape reel” and means that as long as the pedal is on, it’s recording.

You’ll be able to dive back into this memory, scanning through to playback from the past, or play alongside it and create new, layered sounds. Chase Bliss says to think of the pedal’s compositional side as a “free-form sampler” that lets you splice moments together for some truly unique sounds.

“This architecture makes a pile of interesting things possible: never-before-heard delays, bizarre loops and transitions, and even entire songs captured right inside the pedal,” said the brand of the design.

Habit is also capable of handling complex echo sounds for more conventional purposes. These start with familiar level, repeats and size controls on the top row, before moving on to the more interesting modify, spread and scan controls.

The scan knob is probably the pedal’s most essential knob, letting you interact with its two-minute memory in either automatic or manual mode. Engaging the former tells the pedal to auto-scan its memory and playback randomised bits and bobs, while the latter lets you sweep through the two minutes to pick out moments you want.

Meanwhile, the modify control lets you shape your echoes with a selection of flexible modifiers, while the spread knob adds a secondary echo that lets you get multi-tap sounds.

And those features basically skim the surface of what’s possible with Habit (which, by the way, has both a 50-page manual and a video manual). There are, not one, but two dip switch panels located at the top of the device let you further customise each function.

Along with that, are hidden features that let you change the ramping, the signal flow of memory playback and the trails of echoes.

Chase Bliss Audio’s Habit is available for $399 directly from the brand’s website.