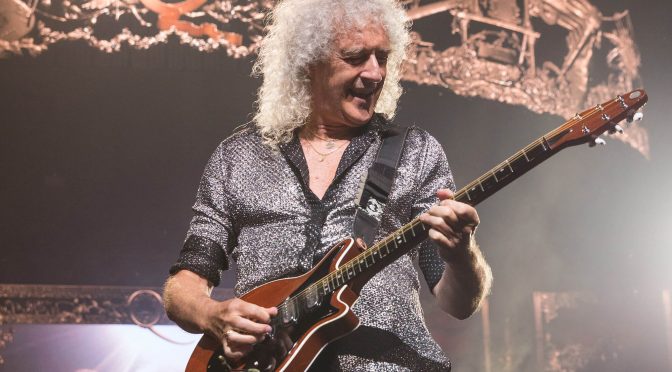 UPDATE (29 November): May has stated that his comments, as reported, were the result of him being “ambushed” by a journalist at the ITV event, and claimed that his words were “twisted” to seem unfriendly towards trans people. “Nothing could be further from the truth,” he wrote in a statement. The original article continues below.

Queen’s Brian May has lambasted a perceived damaging focus on diversity in the music industry of 2021, claiming that the band would be diverse enough if they were to start today. He also heavily criticised the BRIT Awards’ recent move towards gender-neutral award categories.

READ MORE: Watch Brian May jam with his past self in new video for Back To The Light

Speaking to The Sun, May states that Queen frontman Freddie Mercury – who died from AIDS in 1991 – would have found “woke” culture “difficult.”

“For instance, Freddie came from Zanzibar, he wasn’t British,” May said. “He wasn’t white as such – nobody cares, nobody ever, ever discussed it.

“He was a musician, he was our friend, he was our brother. We didn’t have to stop and think: ‘Ooh, now, should we work with him? Is he the right colour? Is he the right sexual proclivity?’ None of that happened, and now I find it frightening that you have to be so calculating about everything.”

May then goes on to state that Queen, if they were to start in 2021, wouldn’t be diverse enough. “We would be forced to have people of different colours and different sexes. And we would have to have a trans,” he said.

His comments are made in response to The BRIT Awards changing their categories to remove male and female distinctions, instead opting for gender-neutral Artist Of The Year and International Artist Of The Year categories.  Calls for the change to be implemented have been present for some time, however, they recently gained traction when non-binary musician Sam Smith was excluded from the male and female award categories.

May called the move “frightening”, saying it was “a decision that has been made without enough thought.”

The move has seen criticism from conservative commentators, with some claiming that it will reinforce discrimination against women, with men dominating the new categories. Piers Morgan, for instance, called the move “a load of woke garbage,” while current Culture Secretary Nadine Dorries said that it would negatively impact the representation of women in the awards.

However, others have praised the move, stating that it makes the BRIT Awards an equal playing field for artists regardless of gender, and creates a more inclusive environment for trans and non-binary musicians. The Independent’s Annabel Nugent stated that dropping gendered categories “makes perfect sense”, noting how many other awards shows have done the same.

The post Brian May says Queen would be “forced” to have people of different races, sexes and a trans person if they started in 2021 appeared first on Guitar.com | All Things Guitar.