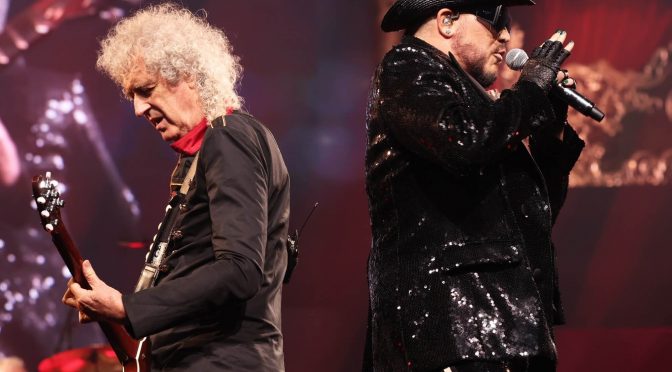 Queen‘s Brian May has revealed ongoing discussions with bandmate Roger Taylor to hold one final tour with Adam Lambert.

The rock legends and the former American Idol contestant concluded the European leg of their third worldwide tour, The Rhapsody Tour, earlier this year after it was originally postponed in 2020 due to the coronavirus pandemic, and it appears that May and Taylor are setting the wheels in motion for one last jaunt with Lambert. Speaking to Variety, May said that there was “a strong possibility” the two acts would go out on tour again.

“We’re talking about that as you and I speak, making those decisions,” May told the outlet. “Now, it does get to be more of a decision as you get older. I’m not 35 anymore, and leaving home for two months is not easy. But we feel as like if we’re all fit and well, that we’d like to go out there one more time. It would probably be in the United States in 2023 at some point.”

May also discussed the possibility of Queen writing music together with Lambert, revealing discussions have tentatively taken place. “I’ve got to tell you it hasn’t happened yet, but we do bring the subject up,” May said. “Generally, when we are together, the live show is all-consuming. There isn’t really time to discuss any studio action. We feel as if the live stuff is what the public wants.”

Adding that the singer had his own career outside the band, May concluded, “So, I suppose that the opportunity to make an album together [might not] come up, but I’m not saying that it couldn’t happen.”

May also recently spoke about the making of Face It Alone, the new single released on the band’s The Miracle box set that featured vocals from the late Freddie Mercury. Discussing the band’s temptation to rework the track into an epic in favour of keeping the simple sound of the final product, May explained, “It could have been developed into a major construction. But we wanted to deliver it as simply as possible. It’s very stark as you can hear, with very little on the track… as sparing as can be.”

“There are places where the boys rescued a word or a phrase to make a reprise of the verse which makes sense – Freddie did three takes – but that’s it.”

The post Brian May reveals discussions for one last Queen + Adam Lambert tour appeared first on Guitar.com | All Things Guitar.