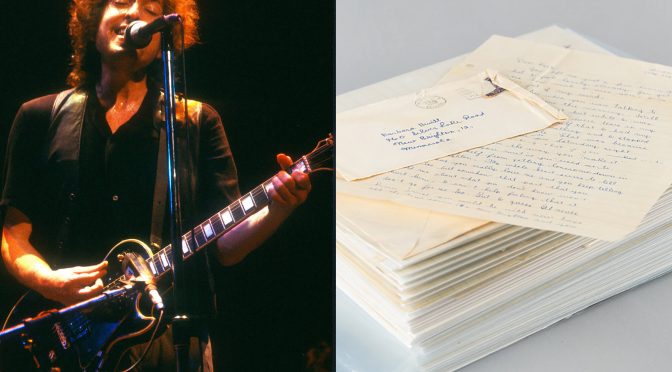 A collection of love letters once sent by Bob Dylan have revealed he nearly chose to perform under the stage name of “Little Willie”.

The letters were sold at an auction in Boston, United States for $670,000 (£563,000) in a bid won by Livraria Lello, a Portuguese bookshop, reports NME. They are said to have been written by Dylan when he was around 16-years-old, addressed to his school sweetheart Barbara Hewitt.

In the letters, Dylan declared his love and spoke of his dream of selling a million records. Hewitt died two years ago, with the 150 pages of letters later discovered by her daughter. The letters, written between 1957 and 1959, reveal that Dylan, (whose real name is Robert Allen Zimmerman) considered a variety of potential stage names including “Little Willie” and “Elston”.

In one of the letters, he drew an invented band with text that read: “‘Little’ Willie, lead singer of the Night Gales.”

RR Auction House executive vice president, Bobby Livingston, said (via Boston Globe) that as far as he knows, there are no other known Dylan writings from 1958-1959, stating, “Nothing like this exists anywhere.”

Livingston explained, “In several letters, he talks about changing his name. He’s getting rid of Bob Zimmerman.” He went on to add, “It’s the formative years of Bob Zimmerman transforming into Bob Dylan, the beginning of the Bob Dylan myth.”

He later said, “He’s talking about the clothes he’s wearing, making fun of [classmates], talks about doowop, about changing his name to ‘Little Willie.’”

At a London auction that took place back in July, A one-of-a-kind Ionic Original recording of Bob Dylan‘s Blowin’ In the Wind sold for $1.7 million.

You can view a selection of images of the letters at rrauction.com.