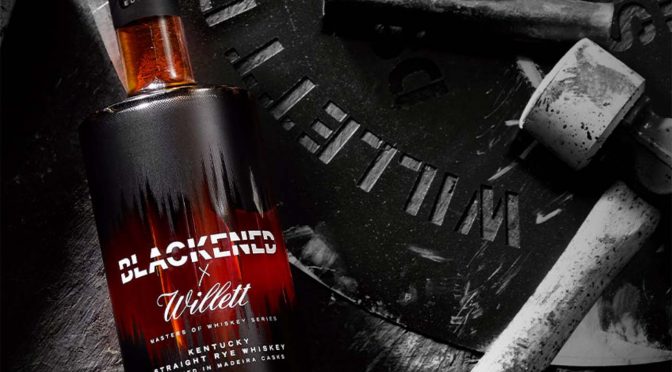 Loud rock music and whiskey isn’t exactly a new combination but how about a Kentucky straight rye whiskey whose finishing barrels have been “pummelled by the low hertz frequencies of Metallica’s music”?

Launched as part of Blackened American Whiskey‘s Masters of Whiskey Series, the inaugural release of the series is the result of a collaboration between “two of today’s most innovative distillers”, Rob Dietrich of Blackened and Drew Kulsveen of Willett Distillery.

During finishing, the whiskey undergoes the trademarked “Black Noise sonic enhancement process”, in which “sound waves visibly shake the finishing barrels, causing a greater interaction between the whiskey and the wood, thereby extracting more flavours and colours.”

The 11-track playlist for the Black Noise process was chosen by both Rob Dietrich and Drew Kulsveen and sequenced by Metallica drummer, Lars Ulrich. The full playlist is as follows:

For Whom The Bell Tolls
Master of Puppets
King Nothing
Welcome Home (Sanitarium)
Dyers Eve (Remastered)
Broken, Beat & Scarred
The Thing That Should Not Be
Atlas, Rise!
Of Wolf and Man
One (Remastered)
Enter Sandman

Perhaps surprisingly, the band’s cover of Whiskey In The Jar does not feature.

“The original idea with Blackened was to create something new, exciting, and unique that connected with both our fans and whiskey enthusiasts – something that stood on its own and was hopefully respected”, said Ulrich.

“The next step was to expand on Blackened’s foundation, to push the possibilities of the marriage of music and whiskey even further.”

The post Blackened American Whiskey is “pummelled by the low hertz frequencies of Metallica’s music” appeared first on Guitar.com | All Things Guitar.