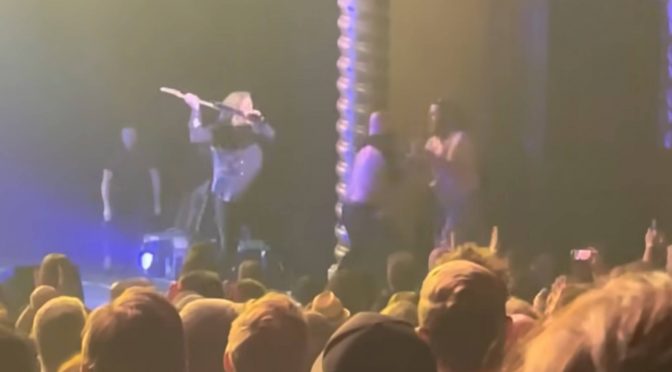 Some lessons have to be learnt the hard way… according to Black Crowes guitarist Rich Robinson, who recently schooled a stage crasher with the back of his guitar.

READ MORE: Polyphia’s Tim Henson on being viewed as a composer: “The average music listener and enjoyer probably won’t give a shit about the things guitarists do.”

The altercation occurred last Sunday during the band’s Melbourne show after a concert goer thought it a good idea to rush the stage while Stare It Cold was being performed.

Security scrambled to get the rowdy fan off stage and while the man did manage to (narrowly) avoid getting swung by the mic stand of lead singer Chris Robinson, the same could not be said about Rich’s guitar.

After taking a hit to his neck, the intruder was quickly pushed off the stage before the incident could escalate any further.

Soon after, one of the band members could be heard telling security: “Hey you throw that motherfucker out. You get the fuck out of here. Get the fuck out.”

Once the man was shown the door, the Crowes promptly restarted Stare It Cold — this time, without any further interruptions.

Check out the footage below.

The Melbourne concert was the band’s final stop on their Australia tour, which has seen The Black Crowes celebrating the 30th anniversary of their 1990 debut album Shake Your Money Maker by playing the record in full.

Come February, the Robinsons are set return to the stage with the Crowes for a back-to-back two-night show at the Pearl Concert Theatre in Las Vegas.

Fingers crossed that Rich will not have to use his Tele as a battle axe this time.

The post Black Crowes guitarist jabs stage crasher in the neck with his guitar appeared first on Guitar.com | All Things Guitar.