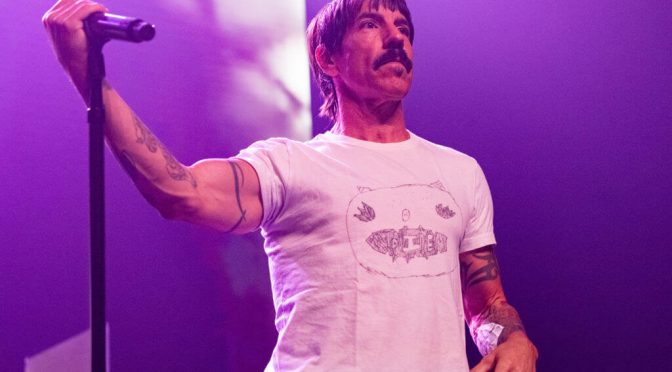 During an interview with Apple Music 1’s Zane Lowe, the vocalist explained that he had encountered a “unique situation” as he tried to write lyrics for the upcoming album, available this Friday (1 April).

Claiming that the remaining members were writing an extensive amount of new material for the new release, Kiedis opened up and admitted he, at times, felt unable to keep up and was forced to take an alternative approach when it came to generating lyrics.

“I had the challenge of being way behind schedule, [but] that’s always the situation,” he states. “The band will write 20 songs and I’ll be like, ‘I’ll get to those lyrics post-haste.’ But now I’ve got 20 songs to add to and then it was 20 more and then it was more… I had a unique situation in so much as I did not have the luxury of editing or censoring”.

Unable to take the same meticulous approach to lyrics as seen in the band’s most famous tracks, namely Under The Bridge and Otherside, the frontman insists that the method of songwriting he used in Unlimited Love became increasingly abstract due to time restraints.

“So much has already been said in songs along the way that I like to find some new way of adding to a song lyrically that isn’t predictable,” Kiedis says. “Whatever came, I had to make use of… because there was too much waiting for me… Usually, I’ll be like, ‘Hmm, maybe, maybe not.’ But in this case, I was like, ‘If it came to me, it’s in the song. Next.’”

He continued, referencing the band’s most recent track, Not The One, as an example of his struggle during the writing process. Detailing how he found difficulty composing lyrics that met the expectations of the other members, he said: “Every day after band practice, I ride home and I listen to what we’ve done that day, over and over and over and over… hoping that it sparks something or that I hear the right melody or something – anything”.

Elaborating on the surprisingly sombre, emotive track, he implies that the original sound of the single followed a very different path: “I started hearing that entire song on the way home, but completely inverted from the way Flea had arranged it – I think I was going through a very lonely and introspective month.”

Yet by adopting this new, off-the-cuff approach to developing lyrics, Not The One proves to be the most ‘authentic’ of the singles released up to this point, allowing the frontman to delve into themes of self-doubt and his experience in intimate relationships.

Explaining the inspiration behind the track, he explains, “This idea [for the lyrics] came about. ‘I think I know who you are, but maybe I don’t. You think you know who I am, but maybe you don’t.’” He concludes, “We all present something and people always have an idea… but what would happen if we just showed each other our very worst from the very start?”

Unlimited Love is available on 1 April.

The post Anthony Kiedis opens up on his struggle to complete the upcoming Chili Peppers Album appeared first on Guitar.com | All Things Guitar.