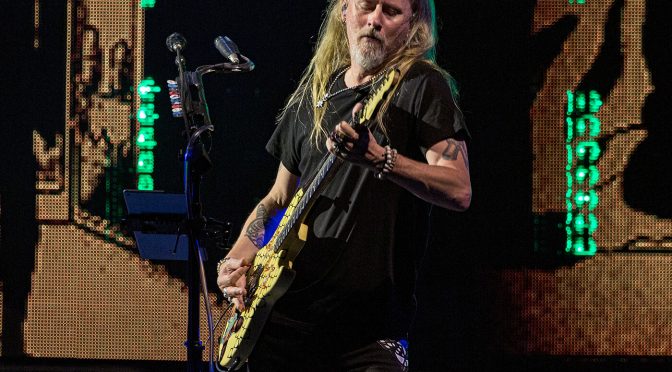 Alice In Chains guitarist-vocalist Jerry Cantrell has announced his first solo album in 18 years, Brighten, due out 29 October. Listen to the album’s first single Atone below.

Cantrell tapped a number of big-name rockers to help on Brighten, including Greg Puciato and Gil Sharone from The Dillinger Escape Plan and Duff McKagan of Guns N’ Roses. Brighten was co-produced with Tyler Bates and Cantrell’s longtime engineer Paul Fig.

Cantrell told Rolling Stone the idea for Atone laid dormant in his head for “20-plus years” saying “sometimes it takes a while for a good idea to find its best form”.

He added: “As a fan of Ennio Morricone scores and Sergio Leone movies, it’s got a bit of that outlaw vibe, with a cool psycho hillbilly stomp”.

Cantrell also said he reached out to Elton John specifically to get his blessing to cover Goodbye. “Out of respect to Elton, I wouldn’t include it unless he said it was OK,” he said. “[Elton] played piano on Black Gives Way to Blue, which I wrote for Layne, so I reached out to Elton, he listened to it, and told me ‘You should absolutely use it.’ I got the signoff by the man himself. I couldn’t think of a better way to close the record!”

See the tracklist for Brighten here: