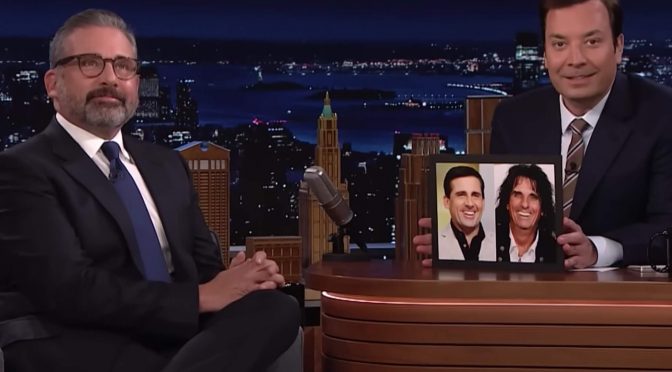 Alice Cooper has been compared to actor Steve Carell during an interview with Carell on American talk show, The Tonight Show.

During the show, host Jimmy Fallon, holds up two side-by-side images of both Cooper and Carell, stating, “Someone says you have a doppelganger out there”, and the crowd erupt in laughter.

“I see it,” Carell stated. He then had nothing but kind words to say on the Poison singer, “I met Alice Cooper I waited on him… When I was waiting tables, I was working at a restaurant he came in and he was Alice Cooper! And couldn’t have been nicer, sweetest guy in the world.”

He continued, “He walks into a room and he’s unmistakably Alice Cooper!” The pair continue to discuss how despite his rockstar looks, Cooper is a “one of the nicest guys”, with Carell adding that Steven Tyler of Aerosmith is also a softie.

Alice Cooper himself shared the clip on his Twitter, asking “Hmmm… What do you think?”

hmmm… what do you think? https://t.co/GF4yELfKgo

People have since been replying to Cooper’s Tweet with further kind regard and memories of meeting him, and giving their take on the resemblance:

Never thought about it, but I can see it. Agree that you are the one of the nicest guys! My husband still tells the story of how you would come into the department store where he worked at the Biltmore in Phoenix, chat with him & help fold shirts

Alice Cooper is currently out and about playing shows, you can grab tickets here.

The post Alice Cooper wants to know if he looks like actor Steve Carrell appeared first on Guitar.com | All Things Guitar.