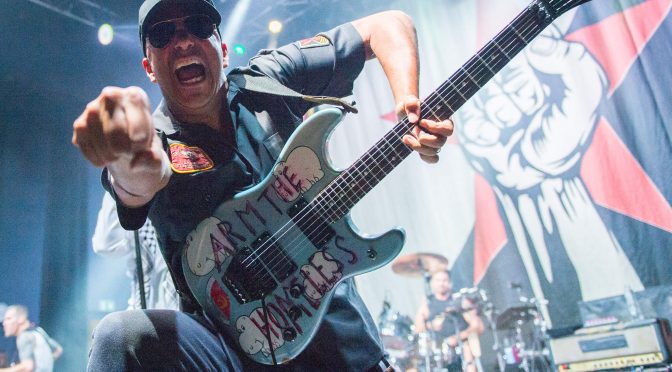 A Canadian pop radio station has been playing Rage Against The Machine’s Killing In The Name on loop and nobody has the foggiest idea why.

READ MORE: Def Leppard put the glam back into Glam Rock with new range of scented candles and beauty products

Vancouver’s Kiss Radio has been playing the loop since their morning presenters Kevin Lim and Sonia Sidhu announced they would be leaving the station as they “were informed” they “won’t be a part of this next chapter.”

Today was our last show on KiSS RADiO. Thank you for everything pic.twitter.com/rRZHySgkMU

If you head on over to their website you’ll notice their content focuses on cupcakes, Harry Styles and the Jonas Brothers and the loop is still very eerily playing amongst their family fun aesthetic.

Luckily, it is the clean version playing so at least there aren’t any families on the school run in Canada chanting “Fuck you I won’t do what you tell me” – every cloud, huh?

The only interruptions to the loop have been recordings of listeners who have called in and asked for them to change the song, but then it goes straight back into the song and their request is ignored.

A journalist at The Guardian called in to ask why this is happening and was reportedly told “I’m not allowed to say. I’m just a guy in a booth, just letting the Rage play over and over. What do you think? Do you like it?” The guy in question also gave the name of “Apollo” which is possibly a pseudonym.

Some have suggested this to be a PR stunt signalling a change to the station, perhaps that it could be switching its programming to be to be rock-oriented. In the meantime, while we remain clueless, reactions on Twitter have been pretty hilarious:

the host: what would you like to hear
caller: i don’t know, literally anything else
the host: [immediately starts killing in the name]

Awww I tuned in at the end of Killing In The Name Of Wonder if they’ll play it again any time soon? @kissradiohits #kissradio #RageAgainstTheMachine

Tom Morello himself has been made aware, he since retweeted this:

@RATM @tmorello a pop radio station in Vancouver laid off all of their staff yesterday. Whoever is on the controls this morning has been playing Killing In The Name Of on repeat since 6am (it’s now 9:30). @KevinLimOnAir @Sonia_Sidhu It’s beautiful. pic.twitter.com/kXi9BLKWb0

So who knows? Maybe we are all suckers falling for their trick, but either way it’s very entertaining. Well played, Kiss Radio. Well played.

The post After DJ layoffs, this Canadian pop radio station won’t stop playing Rage Against The Machine’s Killing In The Name appeared first on Guitar.com | All Things Guitar.