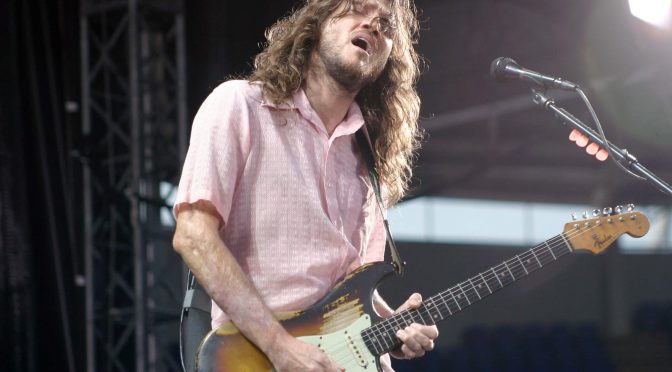 Back in 1988, Eric Clapton and Yngwie Malmsteen became the first artists to receive a signature Fender Stratocaster, and in the 30-plus years since artists of everyone from Tom DeLonge to Jim Root have been graced with signature Strats.

Despite the explosion of signature guitars in recent years, there are still some iconic Strat players – and iconic Strats – that have yet to be immortalised by Fender. Here’s our pick of the most deserving candidates to miss out – so far at least…

One of Mick’s favorite guitars is a Sunburst Frankenstein’d Stratocaster made from parts of a ’63, ’64, and a ’65. As Mick stated in a rare interview with Guitar World, “One of the first real Strats that I ever owned was pieced together using ’63, ’64 and ’65 parts. I bought it for $1,200 while we were on the Girls, Girls, Girls tour in 1987. The pickups didn’t work, so I put humbuckers in it and installed a Floyd Rose. Even though it’s really beat up, it’s a player’s guitar. I still use it onstage and in the studio.”

The humbucking pickups he put in it were custom wound 16k ohm pickups by JM Rolph (a custom pickup builder out of Nashville). Fender’s Custom Shop made Mick a guitar modeled after his 60’s Frankenstrat – that guitar has a heavily relic’d white finish. Mick affectionately dubbed that guitar “Isabella”. Mick’s Strats often feature Floyd Rose bridges that are “decked” against the body, so the action only works downwards – this is a handy setup in the case of a broken string, as the loss in string tension won’t cause the rest of the strings to go out of tune. “Isabella” and the frankenstein’d Strat that inspired it have provided a perfect vessel for him to get the sound that best suits him.

Kurt Cobain was always fond of Fender instruments – namely Stratocasters and Mustangs. He went through many of them over the years, as we all know, he could be a bit rough on equipment! None of the guitars stuck around very long but his most famous Strat might have been the left-handed black Japanese Strat with the sticker that read “Vandalism: As beautiful as a rock in a cop’s face” on the body.

That guitar was only around for about a year in 1991, but timing is everything. A photo of Kurt on his knees holding the guitar on stage at that year’s Pukkelpop festival was captured by photographer Gie Knaeps and quickly became one of the iconic images of the Nirvana icon. The image soon became a massively popular poster, adorning the bedroom walls of millions all over the world for decades to come.

Kurt preferred Japanese-built Strats because they came with slightly smaller frets and at the time they were more readily available. According to the serial number on that guitar [I 006414] it was built at the Fuji-Gen factory in Japan in 1989 or 1990. The guitar featured a Seymour Duncan JB humbucker in the bridge along with the stock pickups in the middle and bridge positions. The guitar featured several different necks over the years. Longtime Cobain Tech, Earnie Bailey put it back together using a Fender neck and it now resides in the EMP Museum in Seattle.

Chevelle guitarist Pete Loeffler utilizes a baritone Sub-Sonic Strat with a mahogany body for the bulk of the drop tunings used by the band. His Sub Sonics are equipped with a single humbucker in the bridge running through a single volume knob.

Mahogany bodies were something that Fender offered for a brief time during their history but have since started offering it on the Jim Root signature model. Root has claimed that mahogany offers better resonant frequency in the lower tunings that he employs. Jim Root’s guitars are not baritones, Loeffler’s are, with a 27″ scale to accommodate Chevelle tunings that can reach as low as A♯. A signature Sub-Sonic would add some artist inspired variance in Fender’s sonic spectrum and the beautiful dark stain finish on Loeffler’s make it a perfect candidate.

Aussie country ace Keith Urban owns about 20 Strats that he uses along with the rest of his vast collection. A couple of them even feature Telecaster necks, which is pretty unique and ripe for Signatur-ing. One of them is a Robert Cray model Start that was painted and it only has a bridge and middle pickup [he calls this one “Silver” or “Stratosphere”]. His tech claims the middle pickup sounds different when you remove the neck pickup, perhaps due to less magnetic pull on the strings. He has several Clapton models that still have the mid-boost in the wiring, but again, a couple of them have Telecaster necks. You often see Teles with Strat necks but not visa-versa.

Frusciante’s main guitar in the Chili Peppers is his 1962 Sunburst Stratocaster that was given to him as a gift the band after he rejoined the Red Hot Chili Peppers in 1998. He has played this guitar on every album since rejoining RHCP, and the ensuing tours. There is some confusion over what pickups currently rest in the guitar. Frusciante claimed that the pickups were Seymour Duncans but his tech claimed this wasn’t true and that the pickups were actually stock Fender American Stratocaster Pickups.

There may already be a few heavily relic’d early 60s sunburst Stratocaster in Fender’s signature lineup –Stevie Ray Vaughan’s Number One is a ’62 neck on a ’63 body, and Rory Gallagher’s is a 1961, Mike McCready’s is a 1960 [not a ’59 as he had previously believed]. But Frusciante’s Stratocaster speaks to a different generation and although there isn’t anything that would make it sonically diverse, it is a very cool looking guitar with a very specific wear pattern.

On Styx’s classic records, James ‘JY’ Young used an old ’65 Stratocaster. These days he uses modern Stratocasters that are built by Fender [some were built by Bill Nash as well]. Many of those guitars feature a [Fernandes] Sustainer and a Floyd Rose. I would propose that Fender build a replica of this guitar with another feature built into it. JY has always played through a custom-built preamp he calls the Yoshinarator. JY explained the unit to Guitar Player,”…without my Yoshinarator I’d really be lost… It’s a preamp/distortion unit that was built for me by Dave Yoshinari, a friend I went to the Illinois Institute of Technology with. It was designed around the guitar I play, and for some reason other instruments just don’t activate it in the same way. So those two are inseparable–that Stratocaster and the Yoshinarator. My style has adjusted to that; I lean on the thing, and it really makes me sound good. If I lose it, I’m going to be in big trouble. I’ve got to thank Dave publicly here, because my sound is based on his talent in the electronics field.”

If Fender could incorporate a Fernandes Sustainer [or comparable Sustainer], a Floyd Rose, and a built-in preamp circuit based on the Yoshinarator, they could offer the complete setup for all the iconic Styx sounds.

The Performance Strat was a custom-built yellow Strat-style guitar that Frank used on his last tour, in 1988. The pickguard features several concentric knobs along with tiny screwdriver-adjustable trimpots to allow his tone to be tweaked with the use of a single screwdriver. But the real genius of this guitar lies beneath the pickguard.

According to a 1995 interview with Guitar Player magazine, Zappa’s tech, “Midget” Sloatman, “The trimpots are identical parametric filter circuits. One trimpot is dedicated to bass frequencies from about 50Hz to 2kHz, and the other one affects the top-end frequencies from about 500Hz up to 20kHz. The filters also feature a variable resonant frequency [or ‘Q’] knob that allowed Frank to control the feedback characteristics of his rig in any hall. He could basically tune his guitar to the room, determine how the room responded to the amplifier, and then use the Q control to elicit the feedback he wanted.
The Performance Strat would be the ideal choice for guitarists who like to be able to constantly tweak their tone without the need of a soldering iron.

As long as we’re talking about Zappa… a replica of the Strat Hendrix smashed at Miami Pop Festival and ended up in Zappa’s collection would be nice too. It started out as a sunburst Strat that was destroyed by Hendrix at the 1968 Miami Pop Festival. Zappa had it hanging on a wall in his basement for years until Rex Bogue put it back together with Zappa-approved onboard effects, such as a Dan Armstrong Green Ringer and a Barcus-Berry piezo pickup. That pickup had a blend knob in the lower horn of the guitar. Frank Zappa, of course, changed a lot of specs, especially in the wiring, over the years. Dweezil returned the guitar to its first incarnation with the mirror pickguard, sweepable EQ, Q frequency tone controls, and many of the same onboard effects that are found on the Performance Stratocaster.

The post 7 artists who deserve their own signature Fender Stratocaster appeared first on Guitar.com | All Things Guitar.